My Ms. Weedle -- by Debbie Parks 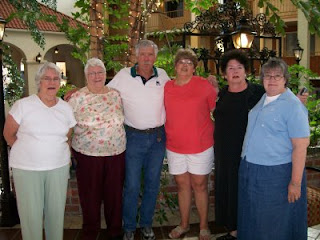 Weedle Caviness is related to me by marriage. I am married to her cousin, Edward Parks. Weedle's mother - Edith Squires Montre and Ed's mother - Tope Squires Parks were sisters. It has always been somewhat of a mystery to me that Weedle and I did not officially meet when my Mother-in-Law was alive. Tope always thought so much of Weedle, and visited her quite often. I rememeber Tope commenting on how very sweet she thought Weedle was, and how much she enjoyed their time together. Weedle returned Tope's visits as well whenever she was in , so they saw each other frequently. My Mother-in-Law and I had a very close relationship and we did many many things together, but unfortunately 20 years passed before Weedle and I were actually introduced.

Two years ago, our paths finally did cross when the house where the Squires family lived for 20 years and raised their 8 children was totally renovated and put on the market for sale. It is a beautiful huge stone home in which dates back to the early 1900's. It features stacked curved bay windows on the

upstairs and downstairs levels on 2 sides of the house , giving it much of a Victorian tower effect. Ed called all of his family to make them aware that the house was available for viewing. This we now know was an oppurtunity of a lifetime for the many generations of Squires family members. Weedle was very interested in the history part of the house, and of course Paul being an architect was equally interested in the structure of the house. Weedle and Ed arranged to have our very first meeting at the house to look at the exterior, as no open house was scheduled for the weekend that we could fit getting together into our schedules .

Our planned meeting day finally arrived and Weedle, Paul, Ed, and I were having so much fun we continued on with a little tour of North Topeka sites that were cherished by the Squires family- The Curtis School where both of their grandparents worked and all the children attended - North Topeka Methodist church- where some of the children met their spouses, and Great Overland Park Railroad Station where the hobos got off the train and headed towards the Squires home to be served a meal on the back porch by Grandma Charity. We finished the morning activities with a delicious breakfast at Brad's Country Restaurant. That was the first of many wonderful times ahead. I think that all 4 of us would agree, that the times we have met the last several years are truly cherished times. I have so many great story's about Weedle, it is hard to chose just one. Reminiscing on just a few: The day we met at for a picnic and having the park to our whole selves - Fried chicken- home made pickled beets - 24 hour salad and peach pie. Walking through the beautiful gardens there and peering through the windows of the little mini town of historic buildings that adorn Ward Meade's premises.

Another fond memory was seeing Weedle reuniting with many of her cousins at last years Family Reunion at and . Weedle was very active in helping with the history of her family- the Montre's - and trying to help Ed fit the many pieces of the Geneology Puzzle with her reflections of past history of her mother's family- the Squires side.

There was also the day that 20 family members decided to attend Apple Festival in . I could never do her performance in the one room school house justice by description. Many of us got to see a different side of Weedle that day, as she acted out the role of school teacher and had us all hysterical with her theatrical expressions. The kids adored her when she got her problem pupil - cousin Ed - to come to the front of the class, for a scolding - sweet Weedle style and a punishment of weari 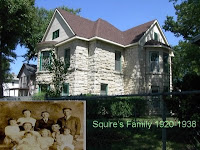 ng a very long pointed dunce hat in front of her pretend classroom full of various ages of Squires Pupils. My most special memory was the day our family met an got to tour the inside of what we lovingly refer to as the old stone house. The tears, the laughter, the extreme emotion that we all shared being in our mother's bedrooms, and wondering what they would think if they only knew. We marveled at the gorgeous rose carvings on the very exquisite bannister and stairway that led to the upstairs. Imagining what it was like in their days of no electricity and running water. Weedle was so overcome that she called her sister Edie who lives in , sharing every detail of that special moment, and then representing Edie's presence by holding up her cell phone in all the pictures. The heartfelt gratefulness she extended to new owner Tim Buser, for sharing the house he so dearly loves with us.

My one Special Memory that I would like to share about my MS. Weedle is one that I will forever hold very near and dear to my heart. It is a Pie Story- Just one I am sure of the many about Weedle and her pie baking talent. At this time I was not aware that pies were Weedle's signature trademark.

It was the day of the Squires family reunion -2007-. Edie and Weedle were coming to the family reunion for the first first time. It was one of those times when all family members united and agreed that this would be the year we will all try really extra hard to be there, doubling the usual yearly attendance. Weedle and I were enjoying our newly found friendship. I had never met Edie but had developed a friendship with her via E mail. Edie and I were so excited to get to meet in person. Weedle was equally excited to see other family members that she hadn't seen in years, and meet their family's . For our covered dish family reunion dinner Weedle brought 4 pies. It was immediately quite obvious to me that she had learned pie baking skills to perfection. Her pies looked like masterpieces. She cleverly had cut out crust into letters and spelled out Squires reunion 2007 on each pie. All the letters were perfectly matched and spaced. I remember my mouth dropping open and making a huge fuss over her pies, and Weedle making very lightly of the huge audience her pies by then had attracted.

After a wonderful day of family sharing and fellowship, we packed up to go to the hotel and spend more family time together during the evening Weedle had one whole pie left - a cherry pie- My FAVORITE- . Being somewhat of a thrifty person she had wrapped it in an empty hamburger bun bag and left it on the counter as she went and said her good byes to the family that wouldn't be attending the reunion the next day at the lake.

I was gathering my belongings and I remember my exact thoughts thoughts as I came across Weedle's pie . TREASURED GOLD wrapped up in an old used hamburger bun sack. My next thought hit me like a ton of bricks. My mother was also an avid pie baker, an 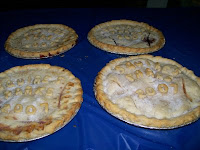 d much like Weedle had very unique ways of decorating her pies. My mother used a toothpick and dotted peoples names in the top crust. These she always gave as gifts to people that she wanted to show her appreciation too or make feel special for birthdays or anniversaries. My mother was well known in the community for this sweet act of kindness, but my dad did not think much of the whole community walking out the door with one of my mother's delicious pies. I'm sure he would have liked to have kept them for himself. About the same time I met Weedle, my parents had chose to make a move to the nursing home due to their failing health., As I looked down at Weddle's left over pie, I then just realized I would never again eat a piece of pie made by mother. I just couldn't seem to help myself, so I STOLE Weedle's pie.

By then several days had passed and Ed and I had invited Edie and her friend Linda and Weedle and Paul to our house for dinner, before Edie's farewell return to . Weedle suggested that I grill hamburgers and she would bring all the rest of the fixings. I guess by then I must have been feeling somewhat guilty about stealing Weedle's pie, because when she arrived I told her that I had a confession to make. Giving me that puzzled ''Weedle look" she commented that she wasn't quite sure she wanted to hear my confession by the way it sounded. After telling her my story of my mother, and my confession as to why I stole her pie, in her very kind Weedle gentle style , she kinda muttered under her breath but loud enough for everyone to hear, that I would have to answer to God about my horrible sin. "

We all chuckled, but Weedle understood the depth of what a mother's love meant , and the little things that mothers do that get taken for granted until they are no more. From then o 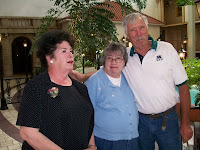 n it, was a very special bond between us. One of which we embraced and wrapped our love and hearts around. Everytime we got together after that, Weedle always made sure I had pie to take home and as she bear hugged Ed goodbye, at the same time she also threatened him with the fact that he was not even allowed a crumb of my pie. In true Weedle style , she always knew it meant more to me than just eating a piece of pie. As I savored every bite, I always referred to the pie she sent home with me as "Weedle Love." I am so honored as blessed for the great times we shared and MY Ms. Weedle will "forever" hold a very special and dear place in my heart.

Photos: Top photo shows Weedle's cousins -- Vivian Kochanowski, Sylvia French, Ed and Deb Parks -- and her sister, Edie MCBride, and Weddle; 2nd photo: Squires house in the past; 3rd photo: Squires house more recently with in-set photo of Squires family; 4th photo: Some of Weedle's pies for the event; 5th photo: Edie McBride, Ed "Red Hot" Parks, and Weedle. Thanks to Debbie Parks for these and many other photos.